Wait for it. Wait for it. How ‘bout dem Cowboys? That is only the second time that phrase has been used here on Down the Line Sports and possibly not the last. The team is on fire and my pick for MVP, DeMarco Murray, is playing like is possessed. The entire offense is clicking on all cylinders and the defense is containing the opposing offenses. I expect the ‘Boys to get their next loss on November 23. They would be 9-1 going into that week 11 matchup with the New York Football Giants. By the way it has been a long time since I’ve heard a good Tony Romo joke.

Enough kissing up to Dallas! Congrats to Peyton Manning on overtaking Brett Favre as the all-time touchdown passer. Have a look at how many people he has thrown TD passes to.

By the way, that’s Peyton Manning not Gary Payton. Payton played in the NBA for the Seattle SuperSonics.

Last week, Percy Harvin was traded from the Seattle Seahawks to the New York J-E-T-S JETS JETS JETS. Reports are still coming out as to why he was traded. Some are saying that he was disagreeable and he did not get along with Russell Wilson. Harvin will now pay for his sins. Would I rather Russell Wilson pass me the ball or Geno Smith? Whatever idiot just said Geno please excuse yourself from this conversation.

The Jets got the better of the deal. They only gave up a mid-round pick to rent Harvin for the rest of the season. If you are gonna miss the playoffs at least do it with a Pro Bowl receiver. 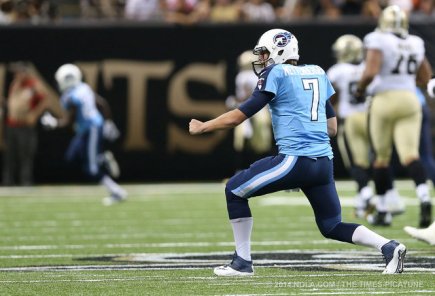 Remember before the season started I said Zach Mettenberger would be the Offensive Rookie of the Year. He will get the opportunity to prove me right on Sunday. This will be his first NFL start. The sorry Titans are giving up on their backup Charlie Whitehurst. Tennessee has young talent and they need some sort of spark and Mettenberger can add said spark. Will they win the AFC South, hell no, but they can possibly make a run at a wild card spot.

Cutler may now be the most hated guy in Chicago. Earlier in the week teammates and the media have talked about Cutler. Brandon Marshall, star wide out, said that the way Da Bears is playing is “unacceptable”. He’s right. I don’t know if it’s the QB’s fault, but he is the maestro of the offense and they are not performing as well as they should, especially at home. Chicago is 0-3 at Soldier Field including losses to Buffalo, Green Bay, and Miami. However, if they don’t think Cutler is the guy, please name someone else who could be better.

To read more on this click here for information.

The Dallas Cowboys released Sam earlier this week. He had been on the practice squad since the season started. The team picked him up because they had a lack of health on the defensive line. Now that the defenders are healthy it really makes no sense to keep him around. Before the season started we knew it would be hard for him to make a team. I’m sure it really wasn’t from a lack of skill and I’m also sure it wasn’t because he gay. Let’s be real. There is a reason this story has not made a lot of noise. Simply put, he’s not that good, but I hope he gets another chance.

What a return to great we had last week! Nobody expected the Rams or the Dolphins to win last week, so we didn’t lose that much ground. I really can’t complain. Considering now that I have a .700 winning percentage. Any who to the picks…

ATLANTA over Detroit   Game in London. Kickoff is at 8:30 AM Eastern.

Buffalo over NEW YORK (A)

CLEVELAND over Oakland    If you watch this game you should be committed!

Have a great week!